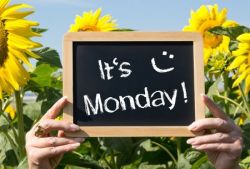 As I lay here in bed, I have to wonder why I'm awake at 3 am. Unfortunately, it seems like a routine anymore. I would love to actually sleep the whole night through and wake up in the morning feeling energized and refreshed. That's how is supposed to work, right?

The reason I'm awake is probably a combination of stress from work, personal stress and just stress in general. I've felt very stressed over the last several weeks and there doesn't seem to be any signs of it letting up.

Yesterday was a bad day. I think I may have taken some of my frustration out on a close friend of mine. It wasn't his fault, but I'm easily triggered when things get as tough as they were. I woke up with a headache yesterday and went to bed with one. Combined with my Sunday woes, Monday just wasn’t a good day.

When I went to bed last night, the nation was waiting to hear the grand jury decision in Ferguson, Missouri. I think we all knew how it was going to play out. Given the amount of teargas and pepper spray the local police forces had acquired in the days leading up to the event, I think it was pretty obvious with the outcome would be. When I woke up in the wee hours this morning and checked my Facebook feed, I wasn't surprised when I saw the rioting and other violence taking place near St. Louis. When I see stuff like that and other violence happening all around the world it makes me wonder about the reality of our existence.

When I look up into the sky and see that vast ocean of stars staring down upon us from the heavens, I wonder how the rest of the universe must see us. We are such an insignificant part of a greater reality. Our petty bickering, overwhelming greed and political maneuvering fill our daily lives. There are those in our various societies who fancy themselves as gods and prefer to dictate the terms of our individual existence. It's been happening for thousands of years and it doesn't seem to be changing. If they only realized just how insignificant they really were.

Power over our fellow man isn’t something to be prized and coveted. The Bible says, “Thou shalt love thy neighbor as thyself.” While the Bible is filled with many such verses, it seems to be used more as a weapon than an instrument of love and compassion. Yet, this ancient text is quoted more often to damn and curse someone than it is to love and cherish them. It can be used as the basis for war and an instrument of destruction when placed into the wrong hands.

We live on a wondrous planet where life has taken hold and flourished for billions of years, yet we rape and pillage it seemingly without consequence. Our time on this world is so short, but many of us spend those precious years trying to destroy one another and everything around us. It makes no sense.

And these are the things I ponder at 3 am.