Additional Thoughts on the New Law

Now that we’ve had a few days to soak in the signing of Indiana’s Religious Freedom Restoration Act by Governor Pence, let’s touch upon a few facts. If you think that this bill wasn’t crafted with explicit intention of discrimination, then I must object to your opinion. If you feel that my interpretation is wrong, then you probably think that my argument against this new law is delusional. Please honor me with a few moments of your time to explain my rationale.

Not that I like to lump all Republications into one, but let’s face it, Republicans do not have a history of supporting gay rights. Like many Republicans, Governor Pence is anti-gay. As a member of the House of Representatives, Pence voted solidly against anything remotely suggestive of gay rights. Even though he refused to answer the question on ABC this past weekend, it’s pretty clear through his voting record that he has taken an anti-gay stance.

I don’t think that Pence is willing to extend his Hoosier hospitality to an LGBT person visiting the State of Indiana nor extend protections and rights to those LGBT citizens living within its borders. Since he has become Governor, he has consistently said that he will not support any legislation that is pro-gay. Governor Pence is obviously a man of deep religious faith, although I feel that it is flawed. Nevertheless, I must disagree with the Governor’s position and stand firmly in my own personal belief.

Fact #2: The Lobbyists at the Signing

I think it would be nice to know who all of the people were at the signing of SB 101. Sadly, our Governor has decided that disclosing that information would apparently be too damaging. That’s OK, some intrepid Internet users took it upon themselves to identify a few of the people at the signing. Notably, three people: Micah Clark, Eric Miller and Curt Smith. The resume of these gentlemen is quite stellar, each of them taking a firm stance against gay rights. Are they anti-gay? You bet. 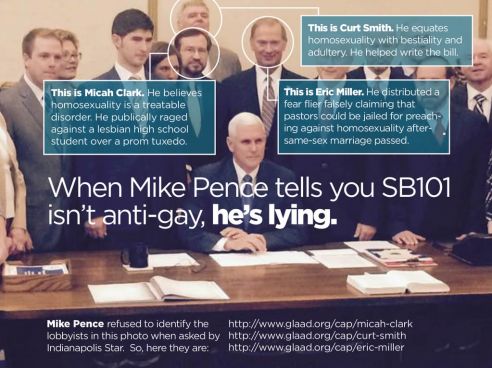 Micah Clark is the Executive Director of the American Family Association of Indiana. The AFA is an anti-gay organization, plain and simple. They claim that their opponents are zealots, hate-filled bigots and “dark and dangerous.” Way to play on the unwarranted fears of Christians everyone by telling them that they are under attack. Beware of false prophets.

Eric Miller is the Executive Director of Advance America. As I wrote in my last blog post, Advance America definitely believed that this law would ensure the ability of those of a particular faith to discriminate against homosexuals.

Curt Smith helped craft SB 101 and is President of the Indiana Family Institute. His opinion on homosexuality and gay marriage is quite apparent. He has stated in a blog article that “homosexuality is harmful to all, including society, and is against the teachings of the God of the Bible.” The IFI website plays on the fears of conservative Christians, claiming that their religious liberties are in jeopardy even in the voting booth (how that is possible is beyond my understanding).

It is true that there are versions of the RFRA in several other states and even a version that guarantees religious freedom under Federal law. The 1993 Religious Freedom Restoration Act was signed into law by Bill Clinton and was created to protect the religious “exercises” of individuals (keep this in mind as you continue reading).

So why do so many states have these laws? A 1997 decision by the U.S. Supreme Court said that the Federal law did not apply to the states, so many states opted to pass their own versions of the law. Illinois passed its own version of the RFRA in 1998, with then State Senator Barack Obama voting in favor of the law. So what’s the big deal?

The climate in America continues to change and I would venture to say that most of the RFRA laws passed in the United States were done so with good intentions. In my opinion, the Indiana law was passed with ulterior motives in mind. In fact, politicians, lobbyists and some special interest groups that are pro-RFRA have been very careful in choosing their words. They deny any language that would suggest that this law is anti-gay in any way shape or form, even though their feelings towards LGBT people is quite obvious. More so, some anti-gay groups that you would think would jump at the chance to praise this legislation have remained mysteriously silent.

Why do we even have this law? Since the original RFRA was passed, proponents of the legislation admit that there have only been about 150 cases related to religious freedom nationally. That doesn't seem like a very big problem to me. The most recent lawsuit I could find relates to a case filed against the State of Kentucky for failing to subsidize the Answers in Genesis religious theme park development, but don't even get me started on that one.

Fact #4: Context of the Law

Whatever the law may say, it is ultimately the context in which it was written that matters most. This law was written with the encouragement of several anti-gay supporters. While their true convictions as it pertains to this law will probably never be revealed to the general public, one can only surmise that this law was written with the full intention of discriminating against those who don’t have the same beliefs as the crafters of the original bill.

“…those specific, long-held traditional beliefs, be it the pro-life belief, be it the pro-marriage belief, be it religious practice and prayer, bring your Bible to work, for example and things like that; those things are under attack and this bill would give people of deep faith a fair and level playing field in court.”

I think the pro-marriage comment pretty much covers that anti-gay condition they intended for this law. While reiterating that this law was in no way anti-discriminatory, Clark additionally stated that the bill would only apply in situations when a person had a “significant recognized religious belief.” Under this law, I thought that I was free to believe whatever I want, but obviously the framers had some limitations in mind.

The anti-gay groups definitely see this law as a win. While they may not come out and say it, they attest to the context of the law. Even though they may deny any discriminatory undertones, it can be nothing other than discrimination on the basis of religious belief.

The Family Research Council, which believes that bringing “religiously-informed moral values to bear in election campaigns and public policy decisions” openly supports the law. While they didn’t take the opportunity to say it, their website is filled with anti-gay propaganda, including several documents that specifically spells out the doom and gloom of gay marriage. I have yet to see any straight people forced to get “gay married” in any state where that is legal. Again, this group is playing on the fears of otherwise good Christian folk who may not understand what is really going on in the world around them.

The FRC isn’t the only group who considers the context of the law to be anti-gay. Americans for Truth About Homosexuality even talks directly on its website about SB 101, further stating that “pro-homosexual and pro-transgender laws discriminate against people of faith and morality.” Really?

In the article, our old friend Micah Clark spells it out for us. He says that the law is only discriminatory if homosexuality is added as a protected status under Indiana civil rights statutes, which it currently is not. Unfortunately, he is correct in this assessment. Indiana does not have any laws in place to protect the rights of LGBT individuals and that’s the key to why proponents of the RFRA are so careful in their choice of words. He states:

“This law does not allow a person of faith to deny service to someone, nor should it.  No Christian bakery owner should say that people involved in homosexual behavior couldn’t shop in their bakery… However, when a customer seeks special participation from the baker, asking him or her to specially decorate a “gay” wedding cake and come set it up at a homosexual wedding, then there is a very different line crossed, and a problem for most people of faith.”

The key to this entire debate is the safeguards that could be offered to LGBT Hoosiers if there was some sort of protection under the law, which there is not. I can guarantee you that our current legislature would not enact any law that protected gays nor would Governor Pence sign any bill into law that protected the rights of a minority of citizens in his state.

Additionally, anyone who says that it is absurd to consider the context of a law is dead wrong. In fact, the way a law is interpreted is extremely important. Every court from the most basic municipal court to the U.S. Supreme Court must consider the context of the law and interpret that law based upon its intended meaning. Ultimately, it will be up to the courts to decide how this law will affect Hoosiers.